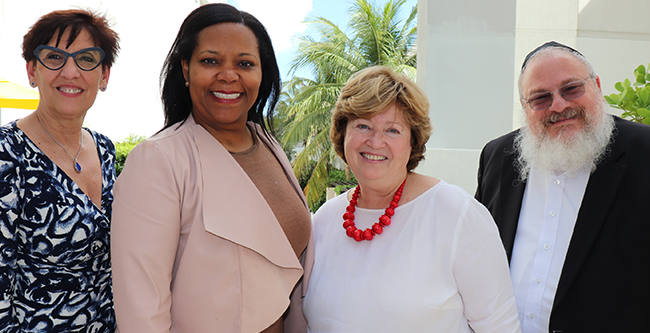 NASHVILLE, Tenn. The Precision Medicine and Health Disparities Collaborative (PMHDC) launched more than two years ago in 2016. Since that time, its mission has been providing important resources for collaborative research teams using precision medicine to eliminate health disparities. On November 5-6, 2018, its investigators gathered in Miami, FL, at an annual meeting to discuss challenges and plans for the future.

“We’re at the halfway point of this grant,” Meharry-Vanderbilt Alliance (MVA) Project Manager Sarah Bland, MBA, MPH commented. “So it was a good opportunity to have all the investigators come together to hear what work has been completed and talk about next steps.”

Jabári Ichimura, Clinical Research Coordinator III for the MVA, agreed. “People weren’t just presenting updates,” he recalled. “It was a conversation … bringing all the cores together to discuss the direction of the PMHDC.”

Photo by Jabári Ichimura
Attendees at the 2018 Precision Medicine and Health Disparities Collaborative Annual Meeting discuss challenges and plans for the future. Siddharth Pratap, PhD, an Investigator in the PMHDC’s Biospecimen and Clinical Data Core believed the meeting was significant as a midway point to see what infrastructure has been built so far.

The PMHDC is the result of a five-year, $11.6 million grant from the National Institutes of Health (NIH).  It’s comprised of researchers from Vanderbilt University Medical Center (VUMC) the University of Miami and Meharry Medical College (MMC) whose primary focus is health outcome disparities among African Americans and Latinos.

“I think this meeting was significant, looking at the midway point on this grant to see what infrastructure – both physical and virtual – has been built so far,” Siddharth Pratap, PhD, an Investigator in the PMHDC’s Biospecimen and Clinical Data Core, said.

Pratap is Director of Bioinformatics and Assistant Professor at MMC.

“We continue to develop a roadmap for the Biospecimen and Clinical Data Core,” he said. “We continue to make plans for connectivity between the three institutions.” 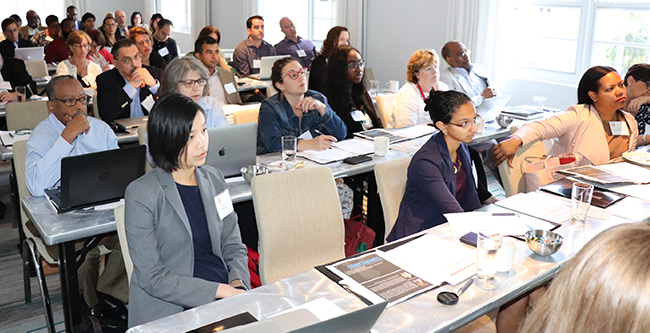 Photo by Jabári Ichimura
Attendees at the 2018 Precision Medicine and Health Disparities Collaborative Annual Meeting went over next steps as they looked ahead to 2019 and beyond. Victoria B. Mitrani, PhD, an Investigator for the Implementation Core, commented that much of the talks centered on advancing synergies among constituencies.

“We discussed next steps and how to integrate that into the work that we’re doing,” Victoria B. Mitrani, PhD, an Investigator for the Implementation Core, recalled.

Mitrani is Professor and Associate Dean for Research at the University of Miami Miller School of Medicine.

Her discussion was one of numerous breakout sessions that allowed for roundtable talks from each PMHDC Core. She and other attendees believed this was ideal for defining terminology that might be different, based in individuals’ respective disciplines.

“A lot of talk had to do with advancing synergies among constituencies.” Mitrani noted.  “Some speak different languages about precision medicine.”

Both Ichimura and Bland pointed to feedback gathered at the meeting that’s already in use to make plans going forward.

“We’re working on a conceptual framework for precision medicine and health disparities, specifically shared definitions,” Bland added. “The PMHDC, as a whole, is going to start engaging more in that framework.”

Mitrani elaborated further. “One of the things that came out of the meeting that we felt strongly about was the involvement of our Ethics Advisory Board members and the responsiveness of the rest of the group to them,” she said. “We want to continue to work to integrate them into the work of the whole.”

Pratap added,” We’ve got several common pre-planning stages, and the actuation happens when a project comes down. We’ve laid out some proof of concept, and I think next is to scale those up.”

“I thought it was a great way for us to come together, because we’re kind of spread out throughout a few different institutions,” Ichimura said. “We have a lot of web conferences, but when we’re all in there together, we kind of vibe off each other and work toward a goal.”

“We’re getting settled in with each other,” Pratap said. “The face-to-face format is useful and increasingly so.”

“I think we really showcased a lot of very important work regarding our younger investigators,” Bland said.

The PMHDC will hold its next Annual Meeting in 2019 in Nashville, TN. Dates are pending.