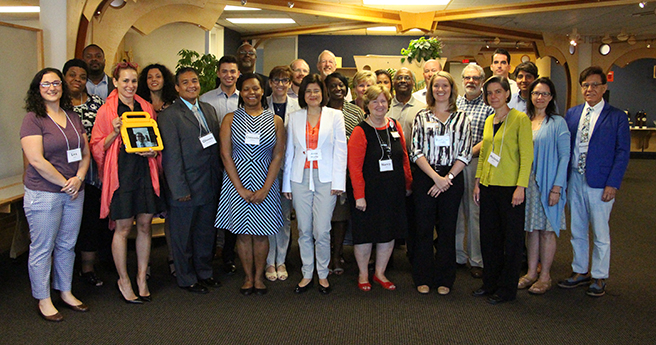 Photo by Matt Schorr
Researchers from Vanderbilt University Medical Center, the University of Miami and Meharry Medical College gather for the launch of the Vanderbilt-Miami-Meharry Center of Excellence in Precision Medicine and Population Health.

NASHVILLE, Tenn. Researchers gathered at Vanderbilt University on July 18, 2016, to launch the new Vanderbilt-Miami-Meharry Center of Excellence in Precision Medicine and Population Health.

The new center -- which will enable research using approaches to precision medicine to eradicate health disparities, specifically those among African Americans and Latinos -- is the result of a five-year, $11.6 million grant from the National Institutes of Health.

The Meharry-Vanderbilt Alliance develops and supports collaborative initiatives and programs in biomedical research and clinical science training. It has assisted in establishing joint and shared residencies in surgery, pediatrics, ophthalmology, orthopedics, urology, cardiology and other medical specialties. Since its founding in 1999, the Alliance has provided opportunities for collaboration between Meharry Medical College and Vanderbilt University Medical Center, and for collaboration with projects in the community. The elimination of health disparities between the majority and minority populations has continued to be a major focus of Alliance projects.

About the University of Miami Leonard M. Miller School of Medicine

The University of Miami Leonard M. Miller School of Medicine was founded in 1952 as the first medical school in Florida and is acclaimed nationally and internationally for research, patient care, education and community service in the United States, South American and the Caribbean. Serving more than 5 million people as the only academic medical center in South Florida, the Miller School of Medicine has earned international acclaim for its patient care and research innovations. The Miller School of Medicine campus consists of 35 acres within the 80-acre complex of the Miami Health District, including more than 2 million square feet of research space, and ranks in the top third among U.S. medical schools in terms of research funding awarded.