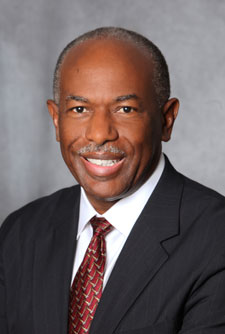 James E.K. Hildreth, Ph.D., M.D. is the 12th president and chief executive officer of Meharry Medical College, the nation’s largest private, independent historically black academic health sciences center. A native of Camden, Arkansas, Dr. Hildreth began his undergraduate studies in 1975 at Harvard University and was selected as the first African-American Rhodes Scholar from Arkansas in 1978. He graduated from Harvard magna cum laude in chemistry in 1979. That fall, Dr. Hildreth enrolled at Oxford University in England, graduating with a Ph.D. in immunology in 1982. At Oxford he studied the biology of cytotoxic T cells with Professor Andrew McMichael and became an expert in mono-clonal antibody technology and cell adhesion molecules.

He attended Johns Hopkins University School of Medicine in Baltimore, taking a one-year leave of absence from medical school for a postdoctoral fellowship in pharmacology from 1983 to 1984. In 1987, he obtained his M.D. from Johns Hopkins and joined the Hopkins faculty as assistant professor.

In 2002, Dr. Hildreth became the first African American in the 125-year history of Johns Hopkins School of Medicine to earn full professorship with tenure in the basic sciences. In July 2005, Dr. Hildreth became director of the NIH-funded Center for AIDS Health Disparities Research at Meharry Medical College.

In October 2008, he was honored for his contributions to medical science by election to the Institute of Medicine, part of the National Academy of Sciences, the most prestigious biomedical and health policy advisory group in the U.S. In August of 2011, Dr. Hildreth became dean of the College of Biological Sciences at University of California, Davis. He was the first African-American dean in the university, which was founded in 1905. He was also appointed as a tenured professor in the Department of Cellular and Molecular Biology as well as professor in the Department of Internal Medicine in the UC Davis School of Medicine.

In May of 2015, he was awarded an honorary doctorate from the University of Arkansas. Dr. Hildreth has been inducted into the Arkansas Black Hall of Fame and the Johns Hopkins University Society of Scholars. He currently serves on the Harvard University Board of Overseers. In 2016, he received the Champions of Health Award from the National Medical Fellowship. In May 2017, Dr. Hildreth was awarded an honorary doctorate degree from Garrett-Evangelical Theological Seminary and in August, he received the Whitney M. Young, Jr. Service Award presented by the Boy Scouts of America.

Dr. Hildreth is married to Phyllis Drennon King Hildreth. They are the parents of Sophia, a captain and attorney in the U.S. Army and James, a recent graduate of the University of Oregon.