NASHVILLE, Tenn. Bassam Zahid, a student at Meharry Medical College, announced the launch of Meharry Mobile Monday night at the Startup Symposium of 2100, the school’s new health and technology group.

Meharry Mobile 1.0 is now available for Android and iPhone devices. The free app provides access to upcoming events, college news, social media and more. It offers a wide range of features, ranging from Blackboard to Tweets about Meharry. Android users can download the app by going to the Google Play Store. The app is also available in the iTunes Store for Apple iPhone users.

Zahid, who is also the founder of 2100, said he was “extremely pleased” to announce the new mobile app’s launch. He called it the result of efforts to boost collaboration and communication among students and faculty.

“By combining my vision for 2100 and their vision for the Meharry Mobile app, we’re hoping to create a culture change,” he said. “You see, we’re living here in an intellectual golden age. Never again will we be surrounded by such a high concentration of extremely intelligent and talented people.”

The student body, Zahid said, was the app’s first official test group. He asked for feedback and suggestions in order to improve it for future users. “Any bugs you find, anything you think needs to be added, if you’re a professor and you feel like you want a little more information out there,” he said, “you can just let us know and we’ll get that added.” 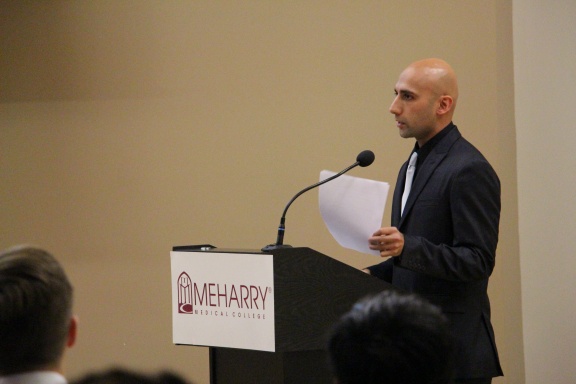