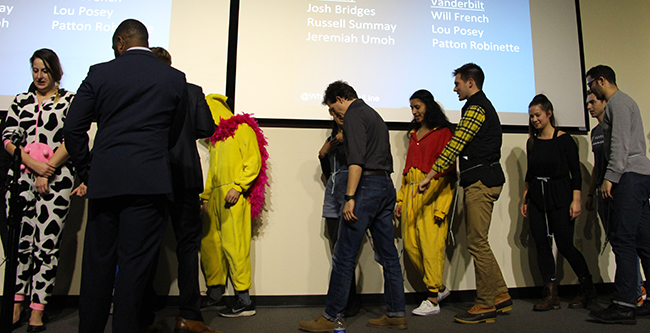 NASHVILLE, Tenn. Members of the Meharry-Vanderbilt Student Alliance (MVSA) raised more than $1,000 for the Saltwagon and the Shade Tree clinics at the group’s third Whose Central Line Is It Anyway event.

“Each year, we do it to raise money for charity,” MVSA Student Representative Afolayan Oladeji explained.

This year, that money went to student-run clinics at both Meharry Medical College (MMC) and Vanderbilt University Medical Center (VUMC).

Saltwagon Clinic was founded by MMC students and established in partnership with the United Neighborhoods Health Services clinic network. Services included free primary care and after hours access to care.

“I thought it was a really positive event,” Oladeji commented. “I think, all too often, students from the respective schools don’t realize the amount of commonalities between they have.”

The Cal Turner Family Center at MMC hosted the event, which marked the first time Whose Central Line Is It Anyway was held on Meharry’s campus. “Previously, I think students kind of viewed it as a Vanderbilt event,” Oladeji noted.

He added, “The nature of the charities – being MMC and VUMC organizations – also brought schools together.”

‘Meetings of the minds’

Oladeji estimated that roughly 200 students from both MMC and VUMC attended. While raising money for Saltwagon and Shade Tree was the primary goal, he believed bringing students from both institutions together was also one of their key aims.

“The mindset of the MVSA is to bring students from both institutions together,” he said. “Ideally, you hope networking is going on, and meetings of the minds.”